The Ragdoll Personality: Nature or Nurture

If you have ever held a Ragdoll, you instantly understand where the name originated and why it is so appropriate to the breed. The Ragdoll's nature and disposition is that of almost unconditional acceptance related to any position or location that an individual wishes to attempt. In fact, the breed is so forgiving in terms of handling that they will often put themselves in danger by not "fighting back" or letting their human know that they are in pain. For example, a cat will typically not be comfortable exposing their stomachs and will often instinctively strike or bite if someone tries to force the issue. This behavior certainly makes sense from an evolutionary perspective as the stomach represents a critical part of the body and one that if exposed, could mean death in a fight.  You will often see a cat roll over and use their back legs to strike while in a fight or playing; however, any penetration of their defenses and they will flip over quickly. Ragdoll's, on the other hand, will actually roll onto their backs in order to get a tummy rub or, as our kittens tend to enjoy, blowing bubbles on their tummies like you would an infant.

The real question that one must ask, is why? The foundation of the breed (as described on the ABOUT​ page of this site and taken from the TICA Breed standard is essentially non-breed specific lineage. Ann Baker described a car accident that one of her cats experienced and the change in personality that she attributed to a genetic alteration. I recall speaking to a breeder some years ago who purchased a number of cats directly from Ann in the early 70's to start his program. He described her as being "somewhat odd" (I assumed this was a PC response to my question "what was she like?"). I asked about the car accident story and he laughed uncomfortably, shrugged his shoulders and said, "like I said, somewhat odd." This story, for years, has painted Ann Baker as the stereotypical "Crazy Cat Lady."

But, What if Ann was right?

​There is a fairly new area of genetic research called EPIGENETICS ("Research providing evidence for the concept of animals "inheriting'' a memory of their ancestors' traumas, and responding as if they had lived the events themselves"). Emory University School of Medicine in Atlanta, Georgia in the Nature Neuroscience Journal (Dec. 2013) published findings on a study that essentially exposed male mice to a rose scent while simultaneously receiving foot shocks. Each time the scent was introduced the male mice were exposed to the shock. They then bred the male mice to females not involved in the experiment and discovered that the offspring, even two generations removed, reacted in a "startled" way when the rose sent was introduced. They further discovered that there was no change to the actual genetic marker that governs the function of the odor receptor in the mouse nose specifically related to the rose scent (M71). There were; however, changes to epigenetic markers that altered the genes behavior and caused it to be "expressed more'' in descendants. Indeed, the offspring reacted even more profoundly than their father's who had actually received the shocks.

​So, if these studies are accurate, it is possible that a traumatic event in the life of "Josephine", aka. the car accident, could have altered the epigenetic markers of certain genes that were then passed to all of her descendants thus "creating" the Ragdoll personality we know today. As this research progresses, we might get closer to identifying the actual genes responsible for Ragdoll behavior and therefore identify the epigenetic markers, until then, we'll just have to content ourselves with the unqualified and seemingly unlimited love of our furry children.

Caring for your new Ragdoll Kitten 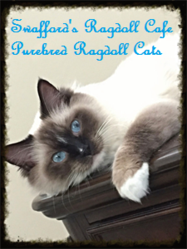 As Sheila and I continue down the breeder's path, we have had the opportunity to learn from some extremely experienced breeders and more importantly, from our kittens and cats. The lessons our little furry babies have taught us are priceless and certainly represent important information for those who wish to be adopted by one of these critters. Given that we are asked consistently about these breed specific items, we thought it would be beneficial to create a set of insights that might help to define expectations as well as inject a little humanity (or felinity) into Ragdoll ownership. To that end, we intend to add articles to this page in blog-like format (minus feedback, of course). If you have suggestions related to specific subjects, please let us know. Happy Reading!

The Genetics of Color/Pattern: A Breeders Perspective